MaxiNet runs on a pool of multiple physical machines called Workers. Each of these Workers runs a Mininet emulation and only emulates a part of the whole network. Switches and hosts are interconnected using GRE tunnels across different Workers. MaxiNet provides a centralized API for controlling the emulation. This API is invoked at a specialized Worker called the Frontend. The Frontend partitions and distributes the virtual network onto the Workers and keeps a list of which node resides on which Worker. This way we can access all nodes through the Frontend.

MaxiNet gives you more than linear speedup for your experiments!

MaxiNet scales nicely with increasing number of physical machines. To find out, we conducted the following experiments: We both emulate a fat-tree and a topology consisting of various small independant islands. In the experiments, we use a traffic pattern that fully saturates every single link. The figure plots the resource usage of the physical machines for different numbers of workers. The green line (s=n) depicts a hypothetical linear scaling where the achieved speedup is equal to the number of physical resources. One can see that the speedups for actual experiments are (depending on the emulated topology) more than linear. The fat-tree toplogy does not scale well because the root switch of the tree gets the bottleneck of the emulation. As MaxiNet does not emulate single switches on multiple physical machines, the physical machine emulating the root switch becomes the bottleneck of the experiment.

The username for both machines is maxinet with the password maxinet.

The file MaxiNet-1.0-rc1.ova contains two virtual machine images: worker1 and worker 2.
You need a program like Virtual Box to run them on your computer.

Start each virtual machine on a dedicated physical machine and make sure the virtual machines can reach each other. For testing purposes both virtual machines can also run on the same physical machine.
The virtual machines are using the IP addresses 192.168.0.1 and 192.168.0.2 on the interface eth0. Make sure both machines can reach each other.
To start the emulation process, login into worker1 and cd to /home/maxinet/maxinet/Frontend/examples/
Specify the OpenFlow controller by editing the file /etc/MaxiNet.cfg. You have to change the line to point to the IP address of your OpenFlow controller. Make sure the controller is reachable from both worker1 and worker2.
You can also start a pox controller at worker1 by invoking the commands:
Before any MaxiNet expepriment can be executed, you first need to start the MaxiNetFrontendServer and the MaxiNetWorkerServers. To this end, on worker1, execute the following commands to start both the Frontend and a Worker: and on worker2, execute the following to start a second Worker: Until now, we have a running Frontend server with two connected Workers. You can check the status of the MaxiNet cluster with the command MaxiNetStatus As you can see, the cluster has two workers which are currently not allocated to an experiment.

You can now start the simplePing example as user maxinet. You can find even more examples under ~/maxinet/Frontend/examples. 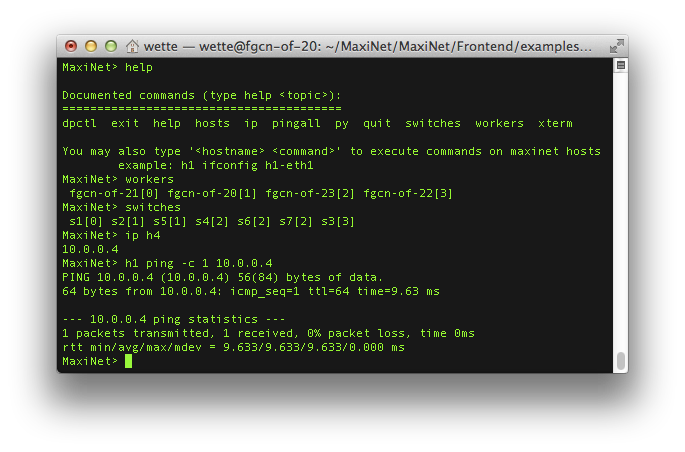 The build-in interactive command line interface (CLI) helps you debugging your experiments. With the CLI, you can execute arbitrary commands at any emulated host. You can even execute commands directly at the workers. In addition, the CLI lets you check which hosts and switches are emulated at which physical machine. The CLI supports X forwarding, which means that you can execute grafical user interfaces on both the workers and the emulated hosts.

MaxiNets Monitoring functionality automatically logs and evaluates the physical resource usage over the course of your experiments. To this end, MaxiNet monitors CPU utilization, memory consumption, and network usage of all physical workers. After an experiment has been finished, this data can be plotted and evaluated to make sure none of the phsical resources was overwhelmed by the experiment.

The Docker container support allows you to run more sophisticated experiments and complex applications in your emulated network environment. Further information can be found in the wiki.

For an automatic installation of MaxiNet use the installer.sh script.

Just copy the script to each physical machine you want to use MaxiNet on and execute the script as the user you later on want to run MaxiNet with. Note that the username has to be the same across all installations.

If you are running Ubuntu, you now have to setup your user to use sudo without password. This can simply be done by adding the following line to your /etc/sudoers file.
Replace yourusername with your user name.

Edit the config file according to the hints given at our wiki.
Note that under Ubuntu, you need to set

Go to https://github.com/MaxiNet/MaxiNet to get the current development version of MaxiNet.

You find all documentation and an API reference here

If you need more information, visit our Wiki.

MaxiNet is actively developed by: This work was partially supported by the German Research Foundation (DFG) within the Collaborative Research Centre "On-The-Fly Computing" (SFB 901).
The research leading to these results has received funding from the European Union's Seventh Framework Programme (FP7/2007-2013) under grant agreement no 318115.